The current state of a computer is almost entirely dependent on the state of the computer’s RAM. That is to say, that the data stored in memory tells the computer everything about what is currently going on. (The processor’s state is also important, but contains far less data).

As long as the state of the RAM can be maintained or recalled, the computer can be returned to the same state.  This is the premise behind power saving modes such as hibernate and sleep (standby/suspend). Both of these modes are common on modern computers (and are prevalent in most machines going back almost a decade).

Remember that RAM is termed ‘volatile memory’. That is, its state is not retained when power is lost. It is only as long as there is power flowing through the RAM that the data is retained.

Typically, a desktop will use about 150W powered up and idle, 5W in sleep, and under 1W in hibernate or when powered off. Most laptops use about a quarter to half the power of a desktop.

Computers and their devices typically have 5 ‘sleep states’ (S0 is not really a sleep state), although, not all are supported by every device.

Why doesn’t it work?

These power saving features are excellent – as long as they work, unfortunately, it often seems that there are barriers to their functioning, the most common of which seems to be the inability for a computer to remain in the desired power-saving mode.

Presuming that a computer supports the necessary power-saving modes (ACPI specification on modern operating systems), and that the necessary resources are available (i.e. hard drive space for hibernate, no loss of power for standby), the question arises as to why these might not work as expected.

(From here on, the word ‘sleep’ denotes a sleep state (S1-S4) – encompassing both sleep and hibernate) 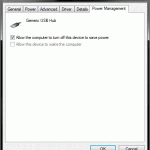 Devices that are commonly troublesome are networking devices and USB devices. Right clicking a device in either of these categories and selecting Properties, should bring up a dialogue box. One of the tabs of this dialogue box should be Power Management.

There are typically two check boxes under the Power Management tab: 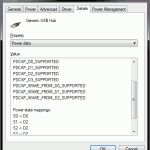 Another common cause of computers failing to enter the sleep state is software running on the machine. An example of would be a media player, which disables sleep modes so that a user can watch a movie uninterrupted. While a cursory review of the software running might be helpful, in many cases, one will fail to identify the software that is preventing the machine from entering a sleep state. Luckily there is a solution.

One of the most useful tools for diagnosing sleep state problems on a computer is built into windows – powercfg. This is a command line tool, and must be run as an administrator. 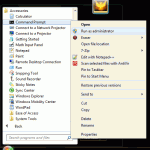 To start, you must open an administrative command prompt.

In order to determine what applications and drivers are requesting power, we can run: powercfg –requests

From the help for powercfg: “Power Requests prevent the computer from automatically powering off the display or entering a low-power sleep mode”.

If I was experiencing trouble entering a sleep state, the above output would suggest that I should consider looking at VLC as a starting point.

Devices that can wake the computer

We previously mentioned how device manager could be used to look at which devices were set to wake the computer from a sleep state. The same task can be accomplished by using powercfg:

This command will output a list of devices that are currently configured to wake the system from any sleep state. (If no devices are setup this way, the command will not output anything).

Last cause of waking

powercfg will also tell us the cause of the last sleep transition:

Another way for a computer to exit a sleep state is due to a timer (some scheduled tasks will wake the computer at a specified time). In order to find out if there are any ‘wake timers’ set, we can run:

If one still has not managed to determine the cause of their sleep state problems, powercfg has one more handy function – an energy analysis. This will attempt to determine what is using excessive resources, and what is preventing the computer from entering a sleep state. There is a good bit of overlap in the output of this command and the commands listed above. This command, however, will produce an HTML file as its output. The command to run is:

This command will run a 60 second trace, and will create an output file (energy-report.html), in the current directory (typically C:\Windows\System32, unless you changed it with cd). Keep in mind that some browsers might not be able to open a file in System32, so you may need to copy the file to a more accessible location.

There are two more features of powercfg that merit a mention.

Firstly, to disable hibernate on Windows 7, one can run:

(to enable hibernate, one would run powercfg -H on)

Secondly, powercfg will show you the sleep states that are supported by your machine:

While by no means comprehensive, hopefully you have, at least a starting point, maybe a solution, and perhaps a different insight into the states of sleep.