As with many AWS products, Cloudfront helps to level the playing field a bit – allowing the individual to have access to the same technologies available to large corporations – of course, that doesn’t always make it cost effective, but it is still pretty cool. The focus of this article is how to leverage the streaming capabilities of CloudFront. 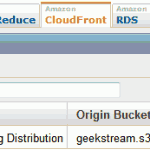 CloudFront distributions come in two varieties – download and streaming. Both types of distributions are created in the same with through the AWS Console – the sole difference being in the selection of the Delivery Method (download/streaming). Both will pull data from S3, but can be configured to use a different origin source.

As a brief overview (you must be subscribed to CloudFront to use it):

Newly created (or modified) distributions are in the ‘InProgress’ state, but will shortly change to ‘Deployed’. Do not forget to set the ACL permissions on your S3 files before trying to access them via CloudFront.

Accessing a File on CloudFront (streaming)

Depending on the file type, it may be necessary to prepend the type before the filename. This is usually true of MP4s and MP3s. General syntax is provided below:

At this point, you should have everything setup to begin streaming – if you have an application that can obtain content over the RTMP protocol, then all you need to do is point it at your content.

If you have enabled logging, CloudFront will create a folder on your S3 bucket, and will create gzipped logs within it. Quite a bit of information is included in the logs (IP, bytes transferred, referrer, edge location, etc). An example is included below:

The following events, at very least, are logged: connect, play, stop, disconnect. A quick look at the logs (and seeking a bit during playback) demonstrates that only the part of the file being requested is downloaded and streaming is in effect.

If you do not have an existing RTMP capable player, you can look into JW Player, an open source player that supports a wide variety of formats, including streaming protocols.

On the other hand, if you are interested it what it would take to create your own streaming-capable Flash application, a starting point is provided below.

ActionScript provides a built-in FLVPlayback class, that is capable of playing many formats, if simply pointed to the source. Essentially, all that is required is the following:

The following bit of ActionScript (v3) will create the FLVPlayback object, and receive the source as part of the query string. It will display an error if the source is invalid. No further error handling is built in. It can go on the first frame of a new ActionScript 3 document. The path to the media stream is set by the ‘v’ parameter in the query string:

When published the above generates a SWF file of approximately 115kB. Before using you must copy the skin file to your project folder. The skins are located (adjust for 32-bit operating systems and version of Flash) in:

A, perhaps more common, method for dynamically passing variable values to Flash is the use of the FlashVars param in HTML (but the query string method allows for direct access). An improvement on this design would be to pass an ID, and have the application retrieve a PHP page, passing the ID – the PHP page, in turn would retrieve the path to the media content from a database and return it to the application (perhaps as an XML file) – however, that is a bit more effort.

As much fun as it is to play with CloudFront and media streaming, the unfortunate fact is that the cost of bandwidth for a site that doesn’t use much is prohibitive ($0.15/GB). The cost of bandwidth does drop considerably with increased usage (down to $0.03/GB over 1000TB/mo), making it potentially viable for larger scale solutions. For individuals with access to virtual (or dedicated) servers, options other than FMS do exist (and many virtual/dedicated servers offer unmetered bandwidth).

Lightweight servers such as lighttpd and nginx have modules that will take an offset in seconds, and add the necessary header so that the file can be played from that point. While not exactly streaming, the end result is often similar.